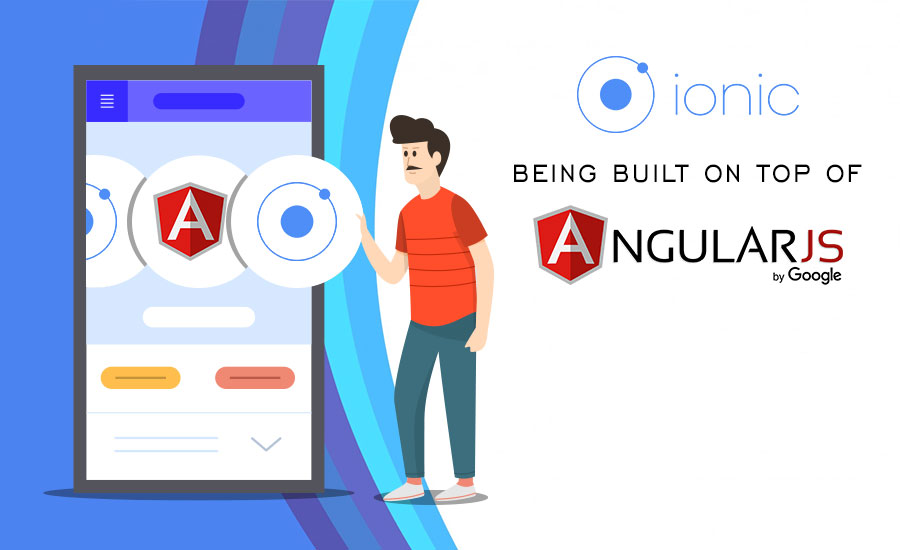 AngularJS has turned up being extraordinary frameworks for building Android and iOS applications across all the major platforms. Ionic is a new entry in the scope of hybrid mobile app development platforms. Ionic is a front-end SDK for building cross-platform mobile applications. Ionic, being built on top of angular, is such a platform which supports the integrating services like analytics and push notifications.

There are various features that Angular fits impeccably into the mobile app development toolbox is its features it’s interfacing capability with back-end web server and external data sources which help to make dynamic AngularJS development services.

Ionic apps give organizations and developers a variety of advantages, one single development code over multiple platforms with the assistance of the most understood JavaScript framework called AngularJS. Developing mobile applications with the mix of superpowers like Angular and Ionic is exceptionally beneficial and achieve bug-free code that all will scale up your progression. The combo of AngularJS and Ionic give rise to an all-inclusive platform providing a UI, construct, debugging, consistent connection and execution.

AngularJS has engaged Ionic framework to end up more efficacious for developers by empowering them to write one single code development code across multiple platforms. The combination of AngularJS and Ionic now doing great and winning the hearts of bunches of tech-savvy businesses and mobile application developers.

Here we are listing out some key points of Ionic and AngularJS development services as a combination.

One App Many Platforms

Technology has progressed and specialists have come up with new approaches to make intuitive and adjustable mobile apps for magnificent user experience. The backing of AngularJS has empowered Ionic to present an entire library of upgrading HTML, CSS and JS tools, and components for mobile. Besides, the combo of AngularJS and Ionic gives a few best advantages to the hybrid app developers. For example, this combination reduces code-writing endeavors for multiple platforms. This implies one single application can keep running on several mobile platforms like Android, iOS, or Windows with no extra development efforts or time.

Ionic depends on utilizing Web Standards, which recommends an Ionic app will fit particularly into your front-end stack, from desktop to mobile to tablet, and will abuse any present web improvement experience on your group. Ionic is the best platform for exploring, UI, create and execute. In reality, Ionic is one phase with more than twelve supportive parts and extensible choices. Ionic is somewhat of a rapidly making group of AngularJS stimulated libraries that make building mobile applications with Angular limitlessly simple and quick. You can’t just neglect Ionic!

Ionic is the most comprehensive open source SDK for building hybrid applications. Most of the mobile app developers complain about the efforts needed to create splash screens and icons for most hybrid apps. Ionic makes this task relatively easier; you just make 2 simple files with .pnd, .ai or .psd extension in the main resource directory, mention the template, and arrange. In many other ways, Ionic disentangles the development task for mobile app developers which is all because of the intensity of AngularJS.

The combination of AngularJS and Ionic is a stunning transformation in the mobile application development economy. With the consolidated utilization of Ionic framework and AngularJS development services, it is possible to develop fast and scalable apps.

*Ionic offers the best ready-made components for mobiles with delightful and extensible themes with typography adjusting to various platforms.

*The most potent CLI function in Ionic that guide developers to create, test and deploy a mobile application on any platform with a single command.

There are lots of benefits of AngularJS and Ionic as a combination as Ionic add to the generally preferable AngularJS features. One of the potential benefits of using Ionic is to help the existing web developers to build mobile applications helpfully and effortlessly, and with a considerable measure of deftness. Along these lines, it saves time and money for business owners as well as mobile app development companies in distinguishing mobile-savvy developers.