What is Edge Computing and what are its applications

Home › Blog: News & Releases › Blog › What is Edge Computing and what are its applications
Blog
August 9, 2018
Posted by : Varalakshmi R
Comments: 0
Likes: 0 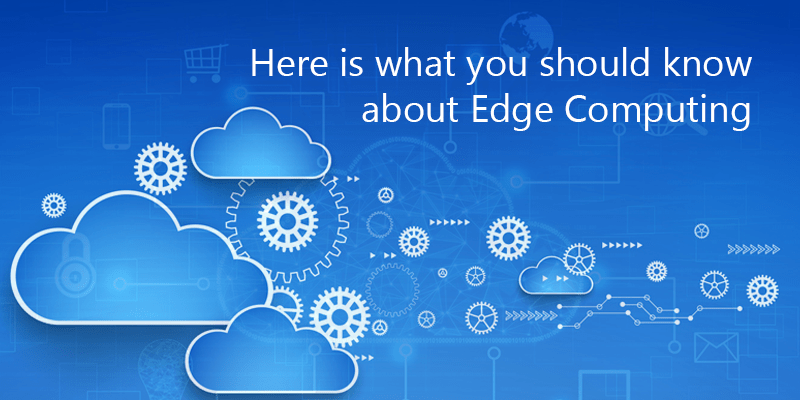 Down the lane of technology and computing, especially from Charles Babbage’s vision of digital programmable computing, we have taken a stroll too far. But boy, are we stranded! We have modified computing in ways unimaginable as some of the most promising technologies of the future have computing at the core.

And because the digital world is focusing mainly on expanding the horizons of wireless connectivity, remote and wireless computational technologies are one of the top priorities of software as well as mobile app development companies.

We have seen Infrared, Bluetooth, and WiFi being invented, over time, which have led us to advanced wireless computing technologies such as Edge Computing.

What is Edge computing?

In simple terms, edge computing defined as “The ability to process & react on data or information wherever it is created.”

According to Gartner, edge computing is distributed computing topology where information processing is done close to the edge, where the people & things product or consume the same information.

Edge computing came into existence because of the IoT devices, which connect to the internet to deliver or retrieve information from the cloud.

At the primary stage, edge computing brings data storage & computation near to the devices where they have been gathered, apart from depending on the central location, which is 1000 miles away.

According to the estimation of Gartner, 75% of the data will proceed on a cloud or outside the traditional data center by 2025.

With the help of this, real-time data will not be affected by the latency issues, and it may affect application performance. Along with it, companies can save money with local processing of data.

This reduces the hassles of transporting huge data volumes between data nodes and data centers, and relieving the load on central data center servers; hence the name Edge Computing. Due to low volumes of processed data to be transferred, the bandwidth required between data centers and sensors (nodes) is significantly reduced.

In the last few years, a large chunk of data is generated due to the rapid growth of IoT devices and their computing powers. To be frank, data will grow like anything in the near feature as 5G networks will maximize the number of connected mobile devices.

Earlier, artificial intelligence and cloud promised to automate & speed up the innovation by taking useful information from data. But, the connected devices have developed unprecedented scale data with so much complexity has outplaced infrastructure capabilities and network.

Transferring all the data that is generated by the devices to the centralized hub or cloud will lead to latency and bandwidth issues.

Quite clearly, edge computing reduces data transmission and management costs over a network. This allows organizations to save quite much on batch processing of big data and hefty data streams over a more extended period.

Compared to conventional cloud computation, edge computing is faster simply because it doesn’t send over the data to central servers, instead of processes the data at the source. This also reduces network latency as the data processing doesn’t have to wait for instructions from data centers for transmission and receiving.

Virtualization is not a new term; however, the way edge computing changes virtualization is remarkable. Not only has it created opportunities for virtual computing due to its faster computation model, but it is also an improvement in terms of scalability as more and more sensors can be connected to the network and generate data without actually affecting the load on the server. However, that would require a broader bandwidth to handle the increased number of nodes.

Enterprises have had long-standing trust issues with enterprise data and confidential information traveling across the World Wide Web, where a skilled hacker can sabotage security lines with just a few lines of code. So maybe the solution is not in making the network secure, but in managing the movement of data securely.

This advantage will make you feel that it is divergent to promote, but finally, it will make some sense. When you are operating in cloud computing also at the initial stage, you need to send your data to the central hub in most of the cases. And to be precise modifying or expanding the datacenters are so expensive.

What not, you can also deploy IoT devices at the edge at a single stretch along with data management & processing tools, apart from waiting for the coordination of various people from various sites or locations.

Sensors are everywhere around us. They are in the elevators, automatic doors, security checks, etc., and collect data as they are used.

With the Internet of Things connecting various components that build our network, edge computing plays a significant role in helping IoT app development companies to bring IoT solutions to reality for many enterprises.

Although IoT is a great idea to connect different elements and layers of technology around us for effective sharing of data and harnessing it for improvements, for data centers, it means more raw data incoming, more processing loads, and maintaining an equivalent throughput. This is where edge computing steps in and reduces the volume of data produced by IoT nodes or simply IoT sensors, thereby leaving a less sophisticated version of data streams for servers to handle.

The salient feature of augmented reality is that it allows you to experience in real-time, the virtual vision it creates. It scans our surrounding, sends the data to servers to process in real-time, and respond at the user’s end.

Currently, one of the biggest challenges Augmented Reality technology is facing is the need for higher bandwidth for AR solutions to reduce latency in responses.

Edge computing considerably reduces latency in the network by processing the data at the source itself, i.e., smartphones, AR gears, etc.

Many industries that deal with Augmented Reality have edge computing architecture to reduce a load of real-time processing requirements of AR, with a focus on reducing end-to-end latency.

But then it is not just the edge computing that creates a tangible difference but also the strength of communication channels.

While end-to-end latency is what AR solution providers aim to give users a smoother and glitch-free experience, most of the data centers make sure that they don’t burn out in terms of productivity and throughput.

Hence, they go for a small, local data center in different locations to make the data travel lesser distance. So in a way, it is not precisely edge computing and rather means moving the data centers close to the cause of data generation.

It means data can quickly transfer between the data centers and generation nodes, which is close enough to be called ‘processed at source.’

According to a study, a city of one million people will generate around 200 PB/day. So, it is better to apply edge computing to process information at the edge of the network is the perfect solution.

The architecture of edge computing works fine with the devices controlling utilities, and other government officials need to react according to the real-time scenarios. By combining IoT and autonomous vehicles, smart cities can change an individual’s life.

By integrating edge computing with the organization, they can minimize inactivity and enhance performance. Rather than AI virtual assistant preparing and sending data requests to the dedicated server, they can divide their weight to the edge centers by playing simultaneously with the local capacities.

Changing data processing to the edge of a network will help companies to take advantage of an increasing number of IoT devices, improve customer experience, and enhance network speeds.

Because of its scalable nature, edge computing will be the perfect solution for the quick-growing agile firms, particularly if they are using cloud infrastructure and colocation data.

The companies can take complete advantage of edge computing to enhance their brand name by providing reliable and flexible service.

Edge computing has a significant advantage over cloud computing for the simple reason that it is faster, more scalable, more secure, and has a wider range of applications in consumer-level services like mobile app development, web services, and even home automation.

With more and more IoT devices coming into the market, innovative organizations have likely only scratched the surface of what’s probable with edge computing.

In the upcoming years, edge computing is set to participate in most of the computing requirements in the future that are set to branch from smart technologies like AI, Machine Learning, IoT, which partly depend on data generated by sensors.